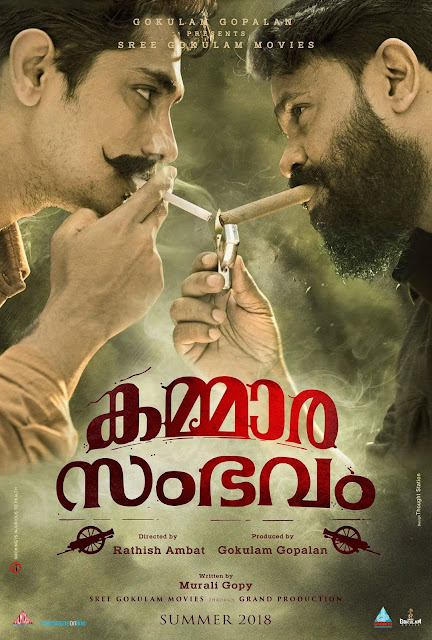 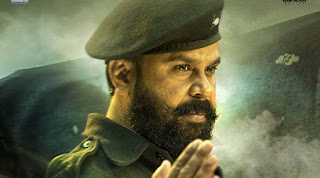 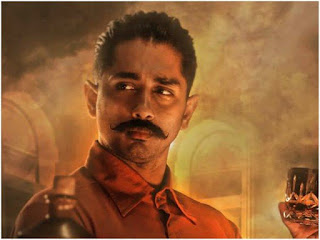 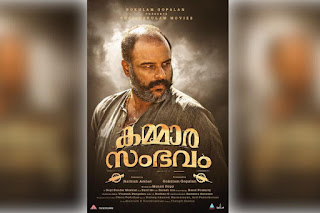 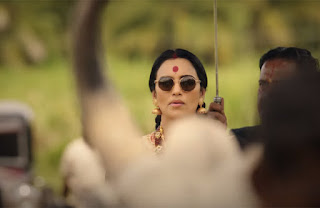 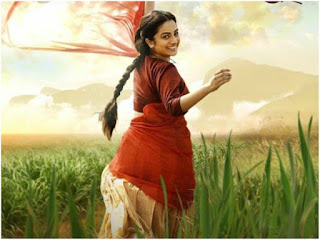 Rathish Ambat’s Kammara Sambhavam  begins and ends with a quote attributed to Napoléon: “History is a set of lies agreed upon.”. The story is about how history is fabricated using a series of “lies,” and how these lies, over time, transforms into solid "Truth". The Epic  film written by the master Murali Gopy, is pretty entertaining –even though it takes a bit long to narrate .

The film begins in the present day, liquor barons expresses their frustration with the frequent bouts of prohibition by both the left and right fronts. They hatch a crazy  but highly effective notion. They buy a party , the Indian Liberation Party which is unpopular in modern times but has an effective past to rely upon. The founder of the party is 96 year old Kammaran Nambiar a forgotten hero. The liquor barons now want to exploit the history of Indian Liberation Party to win the election. They call upon the ace director from tamil cinema to direct a movie on Kammaran Nambiar. The Director (Pulikeshi) pays a visit to Kammaran Nambiar to find him awaiting him to tell the story.

To his surprise pulikeshi finds that kammaran was not a hero but a devious libertine. Kammaran was neither a freedom fighter nor the founder of ILP. He was a mere informer of the british as well as for kelu nair to whom his father had pledged his land. The hero of the bout turns out to be Othenan Nambiar , son of kelu nambiar who joins INA and was the founder of ILP to fight against the british to free india from the british.

The second half of the movie re writes the history for the liquor barons. Pulikeshi makes a movie on Kammarans heroism.The devious kammaran is now made a hero and the gallant hero Othenan Nambiar is now portrayed as a villain. Malayil maheshwari steps in as othenans mother now an hideous character. Kammaran is now rendered as a hero of the past with his upgraded gimmicks and powerful dialogues.

The movie is about 3 hours long and takes its own time to settle to each and every character in the first half. The first half is made an epic and makes us feel the presence of the characters. Certain moments that gives us goosebumps were induced exceptionally well by the director. Dileeps negative character was well accepted and executed. The crowd roared to the dialogue by bobby simha " Ivam MGR alleda ivan MN Nambiar ". Even though the character was well portrayed , certain flaws could be very well seen in Dileeps expressions. The character was so deeply written that in certain situations it looked as if an actor of more caliber could have done more justice to the role. I was astonished to see how well namitha performed her character of bhanumathi especially in the first half. The high voltage performance of Siddharth deserves applause as his character was the one which took the audience over to the second half. Totally siddharth made his debut a memorable affair.

The second half showcased a cinema in cinema identical to the movie velipadinte pusthakam by lal jose. The movie takes a sharp turn from being realistic and engaging to sacrastic and loose content. Dileep now looks more stylish and rides an enfield. He walks slow , throws his opponents in style and fires powerful dialogues. Second half could have been much better and engaging but here it tend to loose the quality and pace of the movie. As the cinema in cinema ends the story takes another twist with the 96 year old Villainous kammaran is back into action. Mahatma Gandhi , Subhash Chandra Bose and Jawahar lal nehru too makes their short lived presence in the second chapter which i felt was amateur and spoiled the realistic image of the movie.

All of the songs in the movie looked vague and was never demanded by the situation. The song in the second half deliberately written to portray the hero as a friend of the poor and downtrodden was fun to watch .
The cinematography was exemplary and was one of the highlight of the movie. This movie is a writers dissent on the current political scenario. He points towards various various political enormities in our society.
In a way or the other Kammara Sambhavam is worth a watch even though its not everybodys cup of tea but i can assure you that you wont regret for being into this drama. Dileeps negative avatar is hardly seen in recent times hence it should be a treat for his fans to watch a dileep who tries to perform a matured character free from his comfort zone. 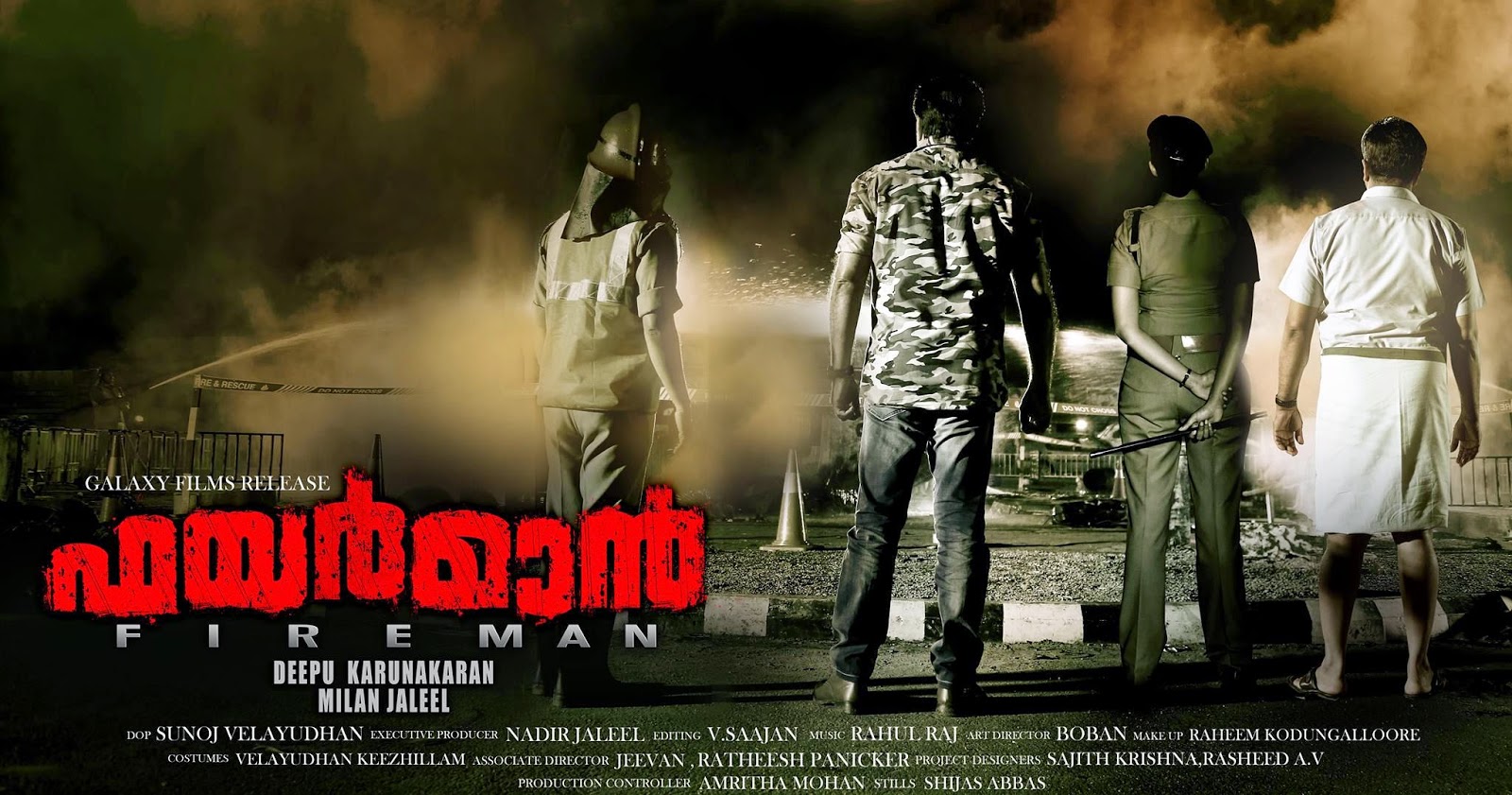 FIRE MAN   Director: Deepu Karunakaran Producer: Milan Jaleel Production House: Galaxy Films Music: Rahul Raj Cinematography: Sinoj Velayudhan Editing: V Saajan Art Direction: Boban Costume Design: Velayudhan Keezhillam Cast : Mammooty as Fireman Vijay  Nyla Usha  as Sherin Thomas IPS   Unni Mukundan as Shajahan  Siddique as comrade Iqbal  Salim Kumar as ????    Plot: The story revolves around a tanker accident that occurs in a major city in kerala .Salim kumar portrays the role of a father whose child is missing from the city , he vigorously searches for her and approaches the police station but he is ignored , misbehaved and further he is assaulted by one  of  the  police constables. Salim kuma THERI     Vijay  As DCP Vijay Kumar / Joseph Kuruvilla Amy Jackson as Annie Samantha Prabhu As Dr.Mithra Baby Nainika as Nivi The review: The movie begins with Joseph Kuruvilla (Vijay) his daughter and Rajendran his employee and their life.Well i must say the first half was quite adorable with cute amy jackson in her new avatar as malayalee teacher.She looks fabulous in her new outfit. The songs were in effective and boring . Editing was not crisp but the director knew what audience wanted in the pre interval sequence. Vijay looked handsome but confident , powerful police by his sharp dressing as an IPS officer. Samantha re-iterated various emotions and sequences from her last outing "10 endrukulle" still she was good. Radhika was a surprise element of fun and she did just a great work.Atlee has dug up certain real life incidents from the past and induced it well into